A fun little shoot in Jacksonville on Adams Street while the sun was still coming up behind the building.

The two women were dolled up as you can see in rather colorful steampunk - or maybe just punk clothes. Their makeup was pretty great and it was a playful shoot - no point to it but then again sometimes I want there to be a point to everything.

No need for everything to be so serious all the time.

I do not know who Larrisha's MUA was - I know she was there at 6:30 in the morning - pretty devoted for sure. In any event I think she did a pretty great job.

We met the motor cycle guy - Shawn Kellett - told him to come back for an image - Larrisha was the first woman on his bike - lucky him. He fixes things that people break - he was in the restaurant - I guess making that work OK.

Burrito Gallery or something like that - good food there.

Have fun, play nice - no one gets hurt. 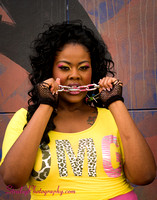 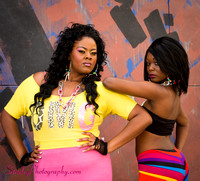 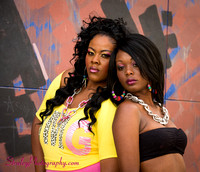