Traditionally, the celebration involves calypso/soca bands and their followers dancing through the streets. The festival starts well before dawn and peaks a few hours after sunrise.[4]
Carnival was introduced to Trinidad by French settlers in 1783, a time of slavery.[5] Banned from the masquerade balls of the French, the slaves would stage their own mini-carnivals in their backyards — using their own rituals and folklore, but also imitating and sometimes mocking their masters’ behavior at the masquerade balls.[6]
The origins of street parties associated with J'ouvert coincide with the emancipation from slavery in 1838. Emancipation provided Africans with the opportunity, to not only participate in Carnival, but to embrace it as an expression of their newfound freedom. Some theorize that some J'ouvert traditions are carried forward in remembrance of civil disturbances in Port of Spain, Trinidad, when the people smeared themselves with oil or paint to avoid being recognized.[citation needed]
The traditions of J'ouvert vary widely throughout the Caribbean. In Trinidad and Tobago and Grenada, a part of the tradition involves smearing paint, mud or oil on the bodies of participants known as "Jab Jabs".[7][8][9][10]
In other countries, J'ouvert is celebrated on the first day of August (Emanicipation Day), and yet for other West Indian countries J'ouvert is observed the night before the daytime "Pretty Mas" parade. Pretty Mas, a bright and festive version of the celebration, features colorful feathers and beaded costumes and is more popular and commercially publicized. J'ouvert values the transgressive dirt while Pretty Mas celebrates the transcendent glitter.[11] J'ouvert can further be contrasted with Pretty Mas such that J'ouvert is said to be for "the people" while Pretty Mas is intended for the establishment.
© StraleyPhotography.com - LTD 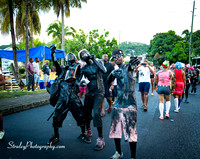