The Jacksonville Giants – our new ABA Basketball team had a charity golf event on Labor Day to support the 26.2 with Donna Marathon. The proceeds from the event are to be donated to the Marathon.

They made a commitment last night to hold several additional events to support 26.2 run with Donna Marathon and there was some kind of talk about game day events - I am not sure exactly what is up with that - but the point is there is a lot of fun to be had, it seems to me, hanging out with these folks! They are great, wonderful energy - and (speaking as a 5'6" person) - people to look up to - literally. They are doing good things with their work with the 26.2 Run with Donna Marathon.

I had the privilege of shooting the event and had a great day in doing so. The Charity Golf Event was September 5, 2011 and began at 2:00PM at the Deercreek Golf Course - http://www.clubcorp.com/Clubs/Deercreek-Country-Club

Please check out the site if you would like to know where it was. A beautiful course, a beautiful drive in, everything in great condition. From what I hear the Deer Creek Course in the Giants' official course.

As always images made during the day of the event are available for download for your personal use at no cost to you and you are encouraged to place them on your FaceBook pages and link to them. Chat up the event and the commitment that was made!

You are also welcome to print them either from my site using the highest quality professional printers in the country (MPIX Pro) or from the downloaded images at your local pharmacy or wherever. Again there is no charge for your personal use of the images.

Commercial use of the images is possible as are large wall sized prints – I have many offerings – let me know and I will help you select and ensure the best quality in the images if necessary to meet your special requirements. All proceeds are donated to the 26.2 with Donna Marathon.

I would encourage you to look around my site – if you like what you see and have photography needs that I can help with please give me a shout!

Here is some general info on the Giants from their site – a extremely successful team right here in Jacksonville! Great people – lots of accomplishment – great stuff – we should all be proud of them and what they are doing for the sport and for the 26.2 with Donna Marathon – I hope to see them running by me in February – so how about it guys? Up for a short 26 mile or so run?

2011 NATIONAL ABA ALL-STAR GAME
In its first season, the Jacksonville Giants hosted the 2011 ABA National All-Star Game. It was held February 26, 2011, at the Jacksonville Veterans Memorial Arena. The top 12 “Best of the Best” players in the United States competed in an East vs. West competition. Giants’ players Jermaine (Slim) Bell and Ed (Hollywood) Horton were two of the select few to make this team. Giants’ Head Coach Kevin Waters were one of only two coaches selected to be Head Coaches in the All-Star game. Waters led the Eastern Division team to an All-Star victory. ABA President Dick Packer, said, “The Giants demonstrated that they can not only play competitive basketball but can also host one terrific All-Star game. I know that everyone in attendance had a great time.”

ABOUT THE GIANTS AND THE ABA 3-D RULE
The Giants, directed by Head Coach Kevin Waters, was established as a fast-breaking energetic team meant to take advantage of the ABA's 3-D rule. The 3-D rule allows the team that steals its opponent's ball before half court to add one point to its point score. For example: If the stealing team makes a two point shot it actually counts as three points on the scoreboard. When the 3-D rule is in effect and a player is fouled, that player has the opportunity at three foul shots instead of the normal two.

ABOUT TEAM OWNER RON SHOLES
Now in its first season, the Jacksonville Giants were formed in September, 2010, by team owner, Ron Sholes, P.A. After a long and productive career in the U.S. Navy, he decided to pursue the field of law. After graduating from the University of Florida law school, he moved to this city to begin his career. Sholes is best known in Jacksonville as the "YOU HURT - WE FIGHT" personal injury attorney who has built a solid legal practice with four locations.
© StraleyPhotography.com - LTD 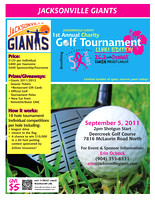