This was a Atos Company trip that I was awarded with 3 other people from the US - we were chosen with a total of 20 people world-wide and were able to include our various partners for some kind of group or individual sales award (each award situation was different). Our trip lasted a total of 11 days.

Candi, my wife, and I went to Barcelona for several days on our own and hung out, toured architecture and tried to eat as much tapas as possible. We rose (early for Barcelona) several times and shot the sunrise - it doesn't come up until 8:15 there - so that took some getting used to. No one was on the streets at that hour!

From Barcelona we took a high speed train down to Malaga (a 6 hour trip at speeds of up to 180 mph) and then an hour+ drive to Ronda.

Ronda is an ancient city known for its very deep gorge and for its bull ring. This is where we met up with the other Atos individuals from all over. More Tapas, more tours - got to see the inside of a bull ring (empty). We also took some time for pretty great sunrise and sunset pics - Pretty dramatic stuff!

From Ronda we traveled by 4 wheel drive jeep in a loose caravan through the back roads to Seville - a trip that took many hours and had various stops along the way - we were with two other people - Jon and Maria from the Netherlands - Jon was kind enough to drive.

In Seville we had various tours and one business meeting - and a number of wonderful lunches and dinners - in old estates, palaces and castles - something else for sure!

On the last day in Seville we traveled to a bull raising farm to learn about bull fighting - I learned a lot about the culture and some of the methods used in raising them, and keeping them wild - they truly are wild beasts when they go into the ring.

So towards the end of that day they asked us to climb stairs into an arena to watch the testing of a cow - they decide when the cow is 2 years old if she is mean enough, aggressive enough, and smart enough, etc to be breed to produce the type of bull they are looking for - this testing takes 20 minutes and they make a decision directly following it to either keep her and breed her or to sell her at that point for slaughter.

I was not able to make the climb up those stairs one more time - I have a badly damaged knee - instead I was able to go into the arena itself and stand behind one of the protective barriers - with my camera. Very amazing experience to be at the same height as the action. The horns are deadly - we saw several of the men there get chases by this animal - she was a bit pissed to say the least!

I have mixed feelings about the action in the ring - but it was pretty intense.


People in the parts of Spain that I saw live with history - their buildings are old - there are things that happened like the invasion of the Christians, the Moors, the Moslems that have influenced every part of the country and culture - it is a real mixing pot. There were architects such as Gaudi who designed simply amazing, creative and astounding buildings. Sometimes the culture was accepting of materials from the Koran being written into the stone walls of the churches and cathedrals - go figure that one out.

All together an excellent trip - my thanks goes to Atos for the honor, to Candi for her excellent planning and organization of our side of the trip and to Sylvie - our wonderful Atos hostess for her wonderful trip planning and enthusiasm!

Thanks to the guides and to the many people who led us around, fed us, and kept us out of trouble. 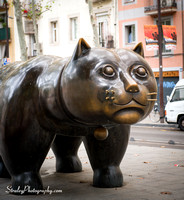 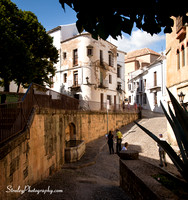